We offer a live, online class in this Ethics course! 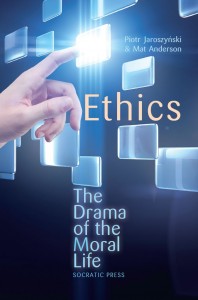 The Angelicum Academy uses an Ethics text read and blessed by Saint John Paul II. If you are enrolled with us, please purchase your book from us and receive free grading and comments from the questions at the end of each chapter as part of your enrollment with us.  (order at this link)

THE IMPORTANCE OF TEACHING ETHICS

Going at least as far back as Socrates  people have wondered about the utility and effectiveness of teaching younger students ethics and morality , not by example – hopefully we all agree that is important – but as a course of study.  In the Meno dialogue Socrates makes much of the distinction between knowing the good and actually doing it. Socrates believed people would do good if they only knew what it was.  Given that history has provided us with ample proofs that mere knowledge of the good is not always sufficient motive for actually doing or being good, nevertheless most people would agree with Aristotle’s view on this:

“Will not the knowledge of it

[the good], then, have a great influence on life? Shall we not, like archers who have a mark to aim at, be more likely to hit upon what is right? If so, we must try, in outline at least, to determine what it is, and of which of the sciences or capacities it is the object.” – Aristotle, Nichomachean Ethics

But are we helping our children to know what is good, what good to aim at, at least in outline?  The answer is all too often, no.  Since the 1970’s most high schools no longer teach ethics or any form of character development based on any coherent moral code.  Relativism, skepticism, pop-self-esteem psychology, and a host of “practical” disciplines have expelled this critical study from most public schools.  With what results? A recent study found that 35% of boys and 26% of girls acknowledged stealing from a store in within the past year [Josephson Institute study of 29,760 randomly selected high school students, public and private]. 64% of students cheated on a test in the past and 38% did so more than once (up from 60% and 35% in 2006). 36% use the internet to plagiarize (up from 33% in 2004). 42% lie to save money. Statistics on drug use, viewing internet pornography and suicide reflect the same worsening trends.

It seems not teaching students what is good, what to aim at, does not work. We are more likely to live good lives if we have knowledge about what makes a human life good – which is called the branch of philosophy called ethics (ethics and morality are variously defined, but in general ethics studies the standards and norms or what is good, and right conduct, whereas morality is about the intentions and particular decisions of individuals.  They are obviously closely related concepts).  Fortunately, most home education programs are not controlled by politically correct relativism devoid of ethics and morality.

We are happy to announce that the Angelicum Academy has participated in the publication of a very important book, ETHICS : The Drama of the Moral Life by Profs. Poitr Jaroszynski and Mathew Anderson.

Not everyone is of the same religion, yet all need an ethical code to regulate their behavior and to live in a civil society.  What then? Classical ethics, as presented in this book, comes from natural reason and shows the rational foundations for human actions, for all people, religious, agnostics, even atheists.  Yet informed religious people recognize the critical importance of natural ethics. In fact, this particular book, read by Blessed Pope John Paul II in 1997, was given his personal blessing.

We are privileged to offer this book as a part of our high school course of studies at the Angelicum Academy.   We recommend it for any student grades 8-12 and up. The book is 145 pages and while the subject is important the reading is relatively easy. Parents and students alike will find it enlightening and helpful as they face many decisions of everyday life with a renewed sense of the importance of choosing the good.

The book may be purchased in the Angelicum bookstore.  Enrolled students may submit their answers to the 68 Study and Reflection Questions found throughout the book for grading by the Academy based on answer keys prepared specifically for the Angelicum Academy by the authors, as part of their enrollment tuition for any grade 8 through 12, and, if desired,  for inclusion on their transcript. This can give parents a good guide to determine if their students studied and understood their study of ethics.

Piotr Jaroszyński holds the Chair of the Philosophy of Culture at John Paul II Catholic University of Lublin, Poland. He works within the framework of classical philosophy. He has written numerous articles and several scholarly books including Metaphysics and Art (Peter Lang, 2002), Science in Culture (Rodopi, 2007), Beauty and Being (PIMS, 2011), as well as many books for a broader public. For his textbook Ethics: The Drama of the Moral Life (6th ed., 2002) he received the personal thanks of Pope John Paul II. Mathew Anderson is a rector of the Ave Maria University Latin America Campus in San Marcos, Nicaragua. He wrote several articles on higher education, epistemology, ethics and metaphysics. 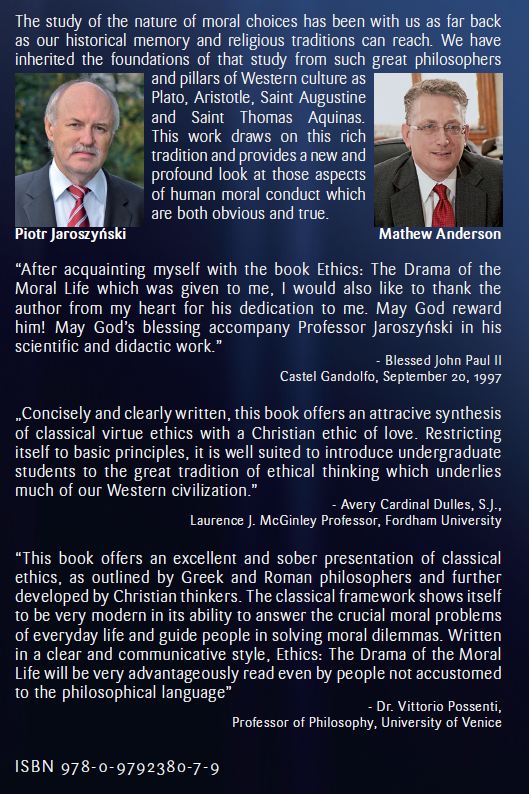